Application of Chitosan in Tissue Engineering and Drug Delivery
Unable to Login? We are here - notifications@learntoupgrade.com
Purchase (0 Items )
There are no items in your cart
Add More 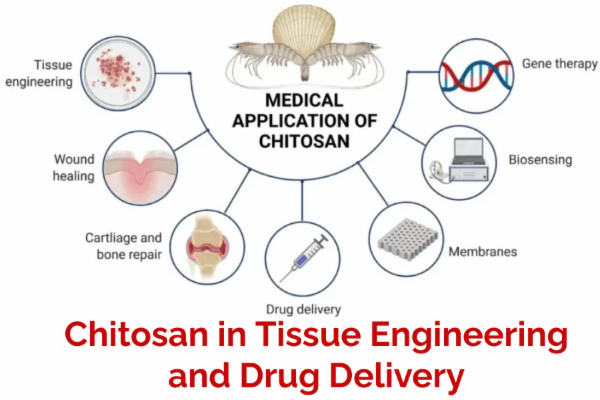 Chitosan, derived from chitin, is a biopolymer consisting of arbitrarily distributed β-(1-4)-linked D-glucosamine and N-acetyl-D-glucosamine that exhibits outstanding properties— biocompatibility, biodegradability, non-toxicity, antibacterial activity, the capacity to form films, and chelating of metal ions. Most of these peculiar properties are attributed to the presence of free protonable amino groups along the chitosan backbone, which also gives it solubility in acidic conditions. Moreover, this biopolymer can also be physically modified, thereby presenting a variety of forms to be developed. Consequently, this polysaccharide is used in various fields, such as tissue engineering, drug delivery systems, and cancer treatment. In this sense, this review aims to gather the state-of-the-art concerning this polysaccharide when used as a biomaterial, providing information about its characteristics, chemical modifications, and applications. We present the most relevant and new information about this polysaccharide-based biomaterial’s applications in distinct fields and also the ability of chitosan and its various derivatives to selectively permeate through the cancer cell membranes and exhibit anticancer activity, and the possibility of adding several therapeutic metal ions as a strategy to improve the therapeutic potential of this polymer.

Chitosan in Tissue Engineering
Chitosan has attracted attention in tissue engineering and regenerative medicine over the last few years. It has favorable properties, such as hydrophilicity, biocompatibility, biodegradability, and antimicrobial activities. Research on the development of scaffolds has emerged due to its functional character. Statistics extracted from data from the Web of Science Core Collection about the number of papers published addressing chitosan applied in the field of tissue engineering over the last years.

The Use of Chitosan as a Drug Delivery System
Chitosan (CS) is one of the most functional natural biopolymers widely used in the pharmaceutical field due to its biocompatibility and biodegradability. These characteristics lead to its promising potential for use as a carrier for drug delivery, especially in the last two decades.
Chitosan (CS) granules can swell and float in an acidic medium (pH 1.2), allowing extensive use of this material in sustained-release preparations of many drugs. From a photographic analysis of the stomach of a rabbit three hours after oral administration of CS granules, the swelling of these granules was observed, which were held in the stomach for at least this duration. Additionally, CS granules have a gel-forming characteristic in a low pH range, which, added to chitosan’s antacid and anti-ulcer activities, can prevent stomach irritation from medications.